Mar. 10: Just when you thought the indoor track & field season couldn’t get any better for Nottingham, along comes the Meet of Champions.

And just when you thought it couldn’t get any better than the 55 meters, along comes the 200.

The Northstars lived up to the meet’s name by producing two champions. Not just champions, but record-holders as well.

Senior Louis Akpadago culminated a scintillating winter season by winning the 55 in an MOC record time of 6.34 Sunday at the Ocean Breeze Athletic Complex in Staten Island.

As if that wasn’t impressive enough, sophomore Shamali Whittle won the 200 in a meet record time of 21.68.

And if THAT wasn’t enough, Akpadago took second (21.76) and senior Dana Ridley grabbed third (21.90). Those three times are the three fastest 200 times in the state this winter, a first in the annals of the indoor MOC.

“They were amazing,” sprints coach Curtis Whittle said. “They’ve embraced carrying the Northstars flag. “We couldn’t be more proud of such a humble group of sprinters. To create history, going one-two-three, that’s a generational type event. They’ll remember that for years to come.”

For Akpadago, it marked the second straight year he won gold in the 55. He felt no pressure having to maintain his crown.

“Going into the race I felt really confident about winning it all,” Akpadago said. “Being the defending champion, I knew my competition was going to be hard and everyone was coming for me, especially because I was the favorite to win. I was very confident all week because of the hard work I put in at practice all year. “

What made Akpadago’s accomplishment even more remarkable is that he did not do what he hoped to while getting out of the blocks.

“I didn’t have the start that I expected to have,” he said. “But it was good enough to win the race, so I was really proud of the result.”

Win the race and set a record, although the latter was just a bonus.

“My mindset all season was winning first, and then take whatever outcome happened,” he said. “But I didn’t really think about breaking records.”

Neither was Whittle, who has been winning races since he was a little kid but is still amazed at how quickly he is becoming a force in high school. He broke the mark of Franklin Township graduate Mario Heslop, who is now at North Carolina A&T.

“It feels unreal,” King Mali said. “I never imagined this happening so soon in my high school career, so it’s all still sinking in. And to beat a record set by Mario Heslop just makes me feel proud knowing I beat a record by one of New Jersey’s best.

And he did so while running in an unseeded heat. Whittle entered the race with the eighth best time in the state, trailing both Ridley and Akpadago.

“My race felt like it was executed really well,” Whittle said. “Once I passed the guy to the outside I knew the race was over. However I believe I could’ve run faster if I was in the seeded heat.”

As it was, he had to settle for a time that “only” set a record he didn’t even think he broke.

“No I didn’t,” Whittle said. “It was after the race when my dad told me I had broken it, and I just stared at the track in shock because I couldn’t believe it.”

The other two Northstars also surpassed their 200 seeds, as Akpadago entered with the fourth fastest time and Ridley with the seventh best clocking.  Despite those seeds, Akpadago felt nothing but a 1-2-3 finish would satisfy Nottingham.

“Sweeping the 200 was our mindset all week,” he said. “We were all going for the meet record. We talked about the 200 all week in practice, about who was going to get a faster time and break the meet record.”

Whittle confirmed those comments, saying he was not surprised at all at Nottingham’s 200 excellence. Especially since the top three finishers are three-fourths of the fastest 4×200 relay team in the state this winter.

“I knew it was going to happen because we were having the best week of practice and in my head I said no one in the state can beat us,” Whittle said. “We will show what we are capable of doing this week at New Balance Nationals once we add our fourth leg, Judeson Mirac.”

“They weren’t really surprised at what they did,” Curtis Whittle said. “They know track & field is a ‘Snooze and you lose’ business so they were really dialed in all week – diet, rest, hydration, the works. Once I saw that, I was quietly confident in a good showing. The records are always fun to get but at the end of the day, 1-2-3 somehow rings sweet. The records were icing on the cake.”

In the girls events, Hamilton’s Gloria Owusu finished 21st in the shot put with a throw of 35-2-1/2. 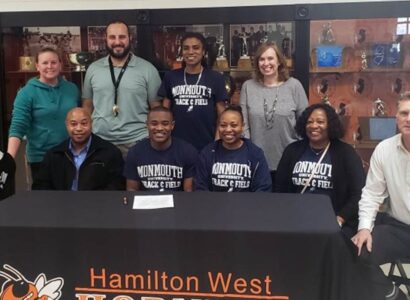 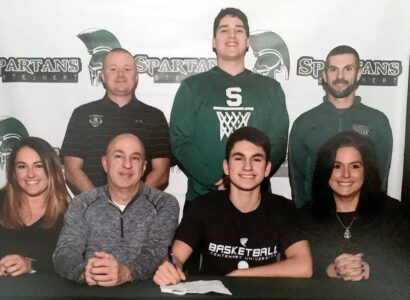