Gil Schaffer was a Leader on the Ice — The former SHS all-star finished his four-year career with 194 points, including a school-record 112 goals. He was the team captain and a CVC Player of the Year. The Spartans had a winning record all four years he was with the program, including the ’06 team which has the most wins in school history (22), least losses (3) and best winning percentage (.852).  Submitted Photo

Gil Schaffer, a valued employee at Ed Snider Youth Hockey, will be inducted into Spartans’ Athletic Hall of Fame April 14

HAMILTON — Even if the Eagles hadn’t defeated the Patriots to win the Super Bowl, he would still be super excited about sports in the Philadelphia area.

“Football was big on all sides of my family,” Gil Schaffer said. A contingent of his family and friends celebrated heartily at the recent parade for the world champions in the City of Brotherly Love.

“(But) hockey was something my dad always wanted to play,” he said. “My dad took me to a game when I was 4.”

Something clicked for the youngster and ice hockey became the participation sport of his dreams. This connection to hockey has remained strong. After starring at Steinert, he moved on to Rutgers 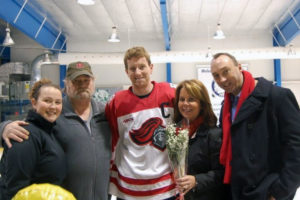 University, where as an intern, he built a relationship with the Ed Snider Youth Hockey Foundation based in Philadelphia. He has moved up the ranks and since July of last year, he has served as Manager of the Snider Hockey Programs.

“I have so much respect for all sports but I felt like hockey was the thing I was most interested in,” he said.

Schaffer was a key to Steinert’s venture into a Super Bowl-type experience during the 2005-06 season.

Like many championship runs, there were obstacles along the way for the Spartans.

Steinert suffered a humiliating loss in a special game just days before the MCT. During Schaffer’s junior year, the Spartans lost to Notre Dame in The Titans Cup, 9-0. 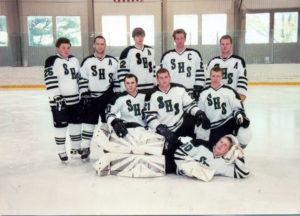 “We were embarrassed,” then-coach Bill James said. “Gil and his line of Mitch Wien and DJ Ruppert took it upon themselves that we would not get embarrassed again. We had a tremendous practice (the next night) and I knew we were ready. Their line dominated in three MCT games, Monday against Hun in the quarterfinal, Wednesday in the semifinals against Hopewell Valley and Friday against ND in finals.

“Gil was tremendous, he had 10 goals and two assists in the three games including two in the final against ND and assisting on Mitch Wien’s OT winning goal (4-3 SHS victory). It was one of the most dominating three-game stretches I have seen someone play, both offensively and defensively, on our team.”

Twelve years later and the 9-0 loss still stings Schaffer, but memories of the euphoria of the MCT championship eases the pain.

“The MCT was two days later,” Schaffer said. “My family comes out for the Cup game, everybody’s family comes out, and we got beat 9-0. It was embarrassing. But you had 48 hours and you were on the ice (in the MCT). We played Hun that Monday and they were the hottest team going and we drew them. I was so mad about Saturday, I just had this internal rage that this season is not going to go down like this. I literally was so determined that no one was stopping us. We went out, and it’s hard for me to talk about it (due to modesty), but I scored three goals in the first period but it was tied 3-3. We came out and scored (again) and we eventually won 8-3. There was no way we were going to get stopped. Two days later we played Hopewell, another really good team, and we beat them 4-2 to set up the rematch with Notre Dame. We were stunned it went to (overtime with the Irish). I took the puck down the wing, I slid it to Mitch (Wien).”

And a champion was born.

“I’ll never forget that week,” Schaffer said. “Standing-room-only (at the rink) at Mercer County Park. I remember thinking that I felt like ‘that was a moment you can never take away from us.’ The best moment I’ve ever had in hockey was winning that championship. Everybody contributed.”

It’s not a coincidence that Shaffer sounds like a coach, along with myriad duties working fulltime for youth hockey, he leads a travel team.

“Coaching is something you take pride in,” Schaffer said. “I’m trying to give other kids the great experience I had. It was his (Ed Snider’s) vision to provide this after-school program for the kids of the City of Philadelphia.

“I’m so proud and happy to do it,” Schaffer said. “I realize I’m really, really lucky to work where there is something that is such a perfect fit for me.

“I work in hockey, I get to coach, I get to teach, I am really lucky to be able to do that and work in the game, and obviously we do really good things.” 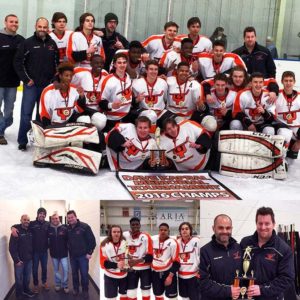 Photos of Gil Schaffer’s experiences with the Ed Snider Youth Hockey Foundation based in Philadelphia.

Schaffer joined Snider Hockey in January 2011 as a Programming Intern and his impact blossomed from there. He was promoted to Coach following his graduation from Rutgers in May 2011 with a B.S. in Exercise Science and Sport Studies, Sports Management. In January 2012, Gil became a Coordinator, Hockey Operations, for Snider Hockey and began supervising Snider Hockey programs at the Flyers Skate Zone in Pennsauken. In the summer of 2016, he was promoted to Senior Coordinator, Hockey Operations, and assumed leadership of Snider Hockey’s coach development initiatives.

“I distinctly remember talking to his mom at our banquet after his freshman year, 2004, and telling her Gil and these freshmen were great leaders and we are going to win an MCT title before they are done,” James said.

For additional information about the Hall of Fame dinner, visit steinertathletichof.com or the group’s Facebook page. 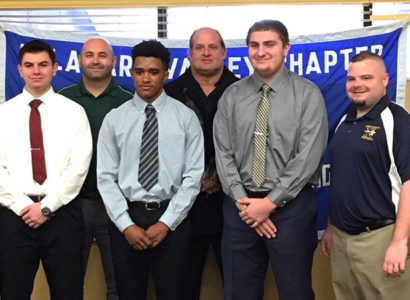 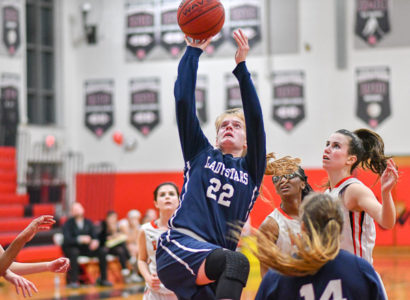