Nottingham Goalie Pat Luckie makes a save against Trenton. Photo by Michael A. Sabo

By Rich Fisher
Fish4scores.com
Sep. 17: The past few years have been somewhat of a struggle for the Nottingham High boys’ soccer team, but there has been one thread of consistency during that time.

Now in his senior year, Luckie has come up with some outstanding games in the net ever since gaining the starting position by default in 2016.

“Originally when I came in I was a back-up goalie for my club team,” said Luckie, who authored a shutout in a win over Trenton Monday.  “I was just the tall guy they threw in the net. Somebody would go down hurt and they’d throw me in because I was the tall guy. My freshman year I went to a (Nottingham summer) camp before the season just to try to impress coach (Mike Braender). I told him I could play in net. I knew they had a spot that needed to be filled and it just went from there.

“I just tried to win every moment I had. I tried to win the camp and be better than every other goalie. I knew they were shorter, I knew I could slot right in there if I tried hard enough.”

Braender was unaware that the majority of Luckie’s playing time was as the tall guy they just threw in there, since all Pat told him was he was a forward and a goalie.

“Our goalie decided not to play his senior season so we kind of said ‘You’re the goalie now,’” the coach recalled. “Obviously it’s worked out for him the last four years. He’s probably been our most important piece the last two years. We might have lost a bunch of games last year by one goal, but without him it would have been three or four goals. He kept us in games with a chance to win.”

It did not start out all that well, however, as Luckie quickly discovered that playing against guys three years older than him wasn’t the same as mop-up time against guys his own age on club.

“Freshman year was kind of like a shock because I had never played at that high of a level,” he said. “Everything was moving fast, my head was on a swivel. I was going crazy. We lost our first game 5-0 and I thought ‘Oh, is this how it’s gonna be?’ But it just got better and better.”

It took a while, however, as Luckie felt as if he were in a shooting gallery during that first year.

“I’m not gonna lie, when I first started it was tough,” he said. “We had a team that won five games and I had 20 shots a game on me. It was tough coming in but I’ve grown to love this position more than anything. That first year, by the end of the year I knew I loved it.”

Luckie is in his second season as a team captain, and Braender calls him “a leader on and off the field. He knows what to expect against other teams, and he helps his teammates prepare for that.”

“He’s got a huge foot,” the coach continued. “His punts and goal kicks are good. He’s just very athletic and mobile. He reads the game very well. He’s always looking ahead, thinking of what’s gonna be next and actually looking towards that. It makes him a better player in the net.”

Luckie is still deciding on where to play in college, but hopes to end up at Rider if everything breaks right. Wherever he lands, Luckie feels, well, lucky about the way things worked out.

“I’m really fortunate I fell into it,” he said. “I took advantage of every chance I got in there and it paid off.” 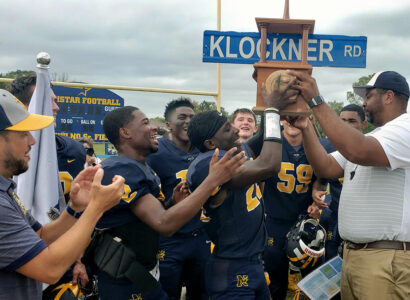 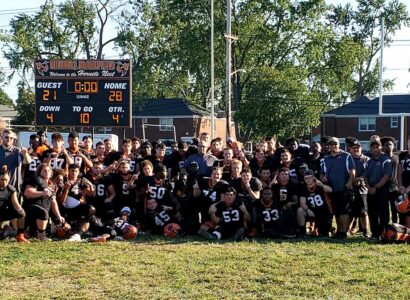