Hamilton’s New Head Coach Mike Papero with players during a game. Photo by Michael A. Sabo.

Mar. 18: Now that he has the job he has always wanted, Mike Papero will go after the state championship that has long eluded him.

has been approved by the Hamilton Township school board tonight as the 12th head football coach in Hamilton West’s 89-year history. It is the position the “Meatball Master” has coveted since playing Pop Warner as a little kid. He played PW because he was one pound too heavy to play recreation football in Hamilton and had to miss a year.

“My dad (Pat Papero) and Bud Ralston started Hamilton Pop Warner, which had heavier weight limits,” Papero said. “Pop Warner teams back then represented the high schools, so I was on the Pop Warner Hornets. We ran the Hamilton West plays, and formed bonds with teammates who we would play with in high school. So I have strong roots in this West community.”

Papero is a 2002 Hamilton graduate. He played offensive line and was part of Keith Hartbauer’s team that lost to Middletown South, 21-14, in the Central Jersey Group III championship game.

And oh, how that loss stayed with him.

“We were down 21-0 in the fourth, and we battled back to make it 21-14, forced them to a fourth down, and they got the first on a fake punt by less than a yard,” Papero recalled. “We know we would’ve scored and tied the game with one more possession, and we would’ve gone to OT. We won in four OTs the previous week against Colonia. I guess you can tell that loss still stings.”

It stings to the point of constant motivation.

“There’s not a day that goes by that I don’t think about that game, and that’s just one more thing that’s going to drive me to lead this program to a state title,” Papero said. “For the players that I looked up to as a kid and those that came before me; to the coaches — who I now truly understand the amount of effort and time that they put in — to the players who are part of this program now. This is much bigger than me. My teammates and I made a pact back in middle school to not leave West without a ring. I’m here to make good on that pact on behalf of all those who came before me.”

Papero is establishing basic goals – win more games and state title. He will draw on several factors to try and make that happen.

“These kids need to show respect for the game, the school, themselves, and those who have come before them,” he said. “We will work hard. We will play safe, tough, physical football for 48 minutes, and we won’t stop. We want to win and  be great, and we don’t have time to stop or let down. We need to compete and get better every day. One of our offseason sayings is ‘Earn It.’ We  aren’t entitled to anything, no one owes us anything.  We don’t expect anyone to give us anything. We will earn everything that comes to us, on and off the field.”

One thing he wants to earn is respect in his own backyard, as Hamilton has lost seven straight games to Nottingham and Steinert, including an unthinkable four straight on Thanksgiving.

“I want to make sure that these kids know how important it is to be the best team in Hamilton Township,” Papero said. “I don’t hide from them the fact that the two games against the other township teams are not like the rest of the games. These games are rivalry games; they are personal and mean a lot to the whole community.”

Papero played under Hartbauer for three years and under Tom Hoglen – the man he is replacing – during his senior year. He did not play football in college in order to focus on becoming a coach and was hired by Hoglen his first year out of school. After two years as the Hornets freshman coach, he ran the offensive line for 11 years.

“I’ve learned a lot from coach Hoglen,” Papero said. “He really cares about his players and that stood out to me.

Principal Brian Smith said both his coaches recommended Papero highly for the job. No doubt his memorable tenure as West co-golf coach played a role as well.

“Mike has been an integral part of this program since he started coaching here a decade ago,” Smith said. “Since I’ve been here at West, I’ve known Mike to be a man of great integrity, discipline, and overall just a great leader.”

What gives Papero’s hiring extra meaning, is the desire he has had to be Hamilton’s coach since before he grew his first whisker. When he had to sit out that year of rec football, he carried the headset wires for Hartbauer the first year he coached Hamilton in 1994.

“They were only 2-7, but the tide was changing,” Papero said. “Over the previous 10 years, West averaged three wins per season, but this was the beginning of a new era, and even as a little kid I was watching and listening to everything that coach Hartbauer did and said. (Things like) ‘Every man, every play, every day,’ or  ‘It’s the little things that matter,’ and ‘We’re only as strong as our weakest link,’ are phrases that will make any player from that time period smile when they hear them. But those phrases stuck with me, and that’s when I started bleeding orange and black and knew that I wanted to be the head coach at Hamilton West.”

Now that he has the job, Papero is in the process of putting together his staff and thanking those who helped him through the years, including Hoglen, Hartbauer, Smith, Athletic Director John Costantino, Norm Paul, Chuck Murphy, Mike Taylor and his parents.

“I owe the most to my beautiful wife,” he said. “She’s a Steinert grad, but I’ve overlooked that. She has wanted me to get this job as much as I’ve wanted it for myself. She has been supportive of my coaching for years, and she’s known how much I care about these kids. I would not be able to do what I am doing if it weren’t for all that she does. She always gives me her honest opinion because she is invested in this program, too. My kids are excited, especially my six-year year old daughter who I’ve formally named as an assistant coach. Her role is to tell me which players are fooling around on the sidelines during games.” 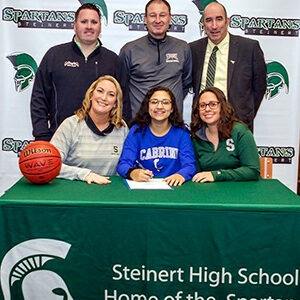 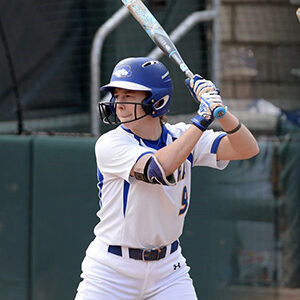