JORDAN MORRISON RECEIVES HIS FISH4SCORES.COM T-SHIRT AND GIFT CARD FROM ROSSI’S BAR AND GRILL.    PHOTO BY MICHAEL A. SABO

In an epic performance against Princeton Saturday, Steinert’s Jordan Morrison had every right to take pride in his 240 all-purpose yards, three touchdowns and lockdown effort on defense.

He directed that pride in a different direction, however.

“Of all that I did Saturday, I’m mostly proud of my teammates for laying great blocks and setting me up for the big game I had,” Morris said. “So all credit goes to them.”

They will get the credit, but it’s Jordan Morrison who gets the Fish4scores/Rossi’s Athlete of the Week for the week running from Oct. 2-8. 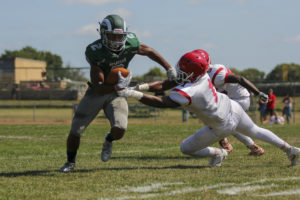 Jordan Morrison looks to turn the corner. Photo by Amanda “The Homeowner” Ruch

Morrison rushed for 30 yards on just four carries, caught two passes for 73 yards and a touchdown, returned a punt 53 yards for a TD and took a kickoff 84 yards to the house. From his cornerback position, he did not allow a single catch against a good passing team; had four tackles and two pass break-ups.

It all led to a much-needed 55-18 victory for the Spartans, who were coming off a bye after blowing big leads in two straight games.

“After our two losses and going into a bye, we knew, as a team, we had a lot of fixing to do,” Morrison said. “We let two leads slip away from us and we knew we were better than that. So, having this bye now was great because it gave us the chance to improve, fix the little things, etc.

”For the Princeton game, we knew we had to come out and be fired up. We knew we had to go out and play great football, so that’s what we did. We were all tired about letting leads up, so we just played our new brand of football.”

Steinert wasted little time setting a tone as the defense got a three-and-out on Princeton’s first possession. The Spartans gained five yards on their first play from scrimmage. As Morrison came up to the line on second down, he noticed a defensive back at outside linebacker with no safety over top of him.

“So I just adjusted my route and flew straight up the field,” Morrison said.

Quarterback Kyle Gankiewicz found him with a pass, resulting in a 55-yard touchdown play.

“Scoring right off the bat feels pretty good,” the junior said. “Just like returning a kickoff or punt return, it makes a team feel motivated.” 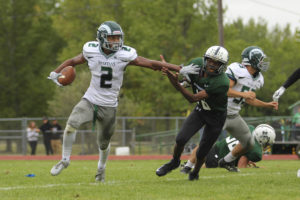 Morrison should know, as he did both, while also serving as a decoy on one TD. With the score 13-0, Gankiewicz faked a handoff to Jordan, then took off on a 27-yard TD run. Steinert held on Princeton’s next possession and Morrison promptly took the punt all the way back.

“Azure Johnson jammed up the gunner pretty good, so once he came down field, I only had to make one cut and go,” Morrison said. “After that, I just used my speed and made one more nice cut between two Princeton players, then I scored.”

In the second half, coach Dan Caruso did everything he could not to score with Steinert holding a 48-0 lead. But there wasn’t much the coach could do when Morrison took the opening kickoff back for the Spartans’ final TD.

Once again, Jordan was thinking ahead on the play.

“I saw Princeton loaded my right side of the field with six players, so I caught the kickoff and decided to run left and wrap around the field,” Morrison said. “I read a great block from Jordan Goodarz, which set me free, and from there, I just took it straight down the sideline.”

Much like scoring on the game’s first series, Morrison felt the big returns help light a fire. 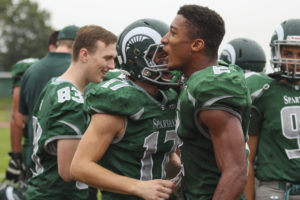 “It gives a lot of motivation and momentum to your team,” he said. “It fires everybody up and makes them want to get back out on the field and make plays.”

As for his defensive effort, Morrison once again passed the credit on to others.

“Coaches (Bill) James, (Brad) Harris and (Kyle) Flanagan stressed all the passing plays they did in practice by doing seven-on-seven drills,” Morrison said. “Once our team was in the game, we were used to everything they were throwing at us. Since we knew, it basically knocked them off their game and put us at an advantage.”

Getting the ball in Morrison’s hands was a pretty good advantage as well. 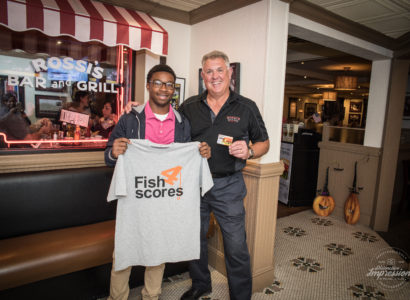 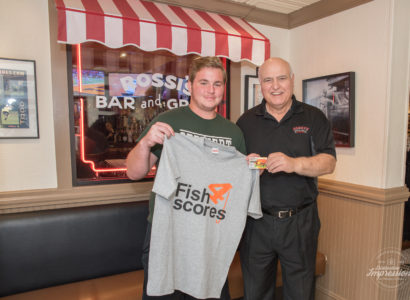