Nottingham junior Louis Akpadago proudly displays his gold medal after winning the 55 Meters at the Meet of Champions in a record-tying time of 6.38.

Franklin Township’s super sprinter, Mario Heslop, was attempting to win three gold medals at today’s NJSIAA Meet of Champions in Toms River, but could “only” get two out of three as Nottingham junior Louis Akpadago twice tied the MOC record by winning the 55 meter dash in 6.38.

Akpadago tied the mark (held by Heslop) in the trials, and equaled it in the finals while the man known as Super Mario took second in 3.41.

“He was excited to run against Mario,” coach Jon “Big Dawg” Adams said. “Mario was trying to triple but the pacing of the events didn’t favor him to do that. Louie has been right with him all season. In fact Mario had set that 6.38 time so, we knew Louie was gonna have to get out of the blocks quick.”

“He’s been focusing on that,” Adams said. “It was a big moment. When they ran the trials he was so excited. He blew the field away and then he came back and did (the same time) again in the finals. It was just a great moment for him. He’s worked so hard. He set his goals and was looking forward to challenging one of the best runners in the state. He was able to beat him, and it’s just a testament to how hard he’s worked this year.”

Akpadago also qualified for the 200, but Adams felt the meet was not set up accordingly for his runner to succeed.

“The 200 was before the 55 final so I thought it would have been tough for Louis to beat Mario if he had done that,” the coach said. “We scratched him and it paid dividends. A lot of people were shocked. Mario has been the best sprinter in New Jersey the last two or three years. He’s a hard worker, he’s done everything. But I know Louis is equally talented.”

Akpadago was one of four medal winners for the Northstars, while Hamilton West also had two runners bring home hardware.

Shamali Whittle continues to be the most impactful Nottingham freshman runner since Grace Dwyer was running distances earlier this decade, as Whittle took seventh in the 200 (22.82) and eighth in the 55 hurdles (7.90).

“I’ve been talking to Shamali’s dad and he has six of the best times for freshmen hurdlers in the country,” Adams said. “He’s also very talented in the 200 meters. It’s a shame they don’t run the 200 throughout the whole state process.”

Speaking of the 200, junior Dana Ridley took third in 22.26 without running in the fastest heat.

“I believe if Dana had run in the heat with Mario, I don’t think he would have beaten him but I think he would have taken second,” Adams said. “That’s a great one-two punch we have with Louis and Dana in the 100 and the 200 for outdoor. We’re looking for Dana to have a dynamic spring.  The sky’s the limit. Dana’s really got potential to become one of the best runners in Nottingham history.”

“The guy has worked really, really hard and committed himself to track,” Adams said. “He had a great football season, he’s a dynamic athlete. He came off a great football season, he was an all-world punter and kicker, but this is what he loves. He loves to run track, he loves the hurdle. We’re gonna ask him to do more things in the spring, some jumps and some sprints. He’s excited about that.”

As is Adams, who was actually excited for all of Hamilton Township at today’s event at the Bennett Center.

“It was definitely a great day for Nottingham track and Hamilton Township track in general,” he said. “Terris Burton just missed getting a medal (for Steinert), and Javon (Porter) and Brandon (Muir) both medaled for Hamilton West. . So Hamilton Township put on a good show today, I thought. We represented real well and I think we’ll do the same in the spring.” Porter, a junior, finished fourth in the 55 in 6.48, while Muir, also a junior, was seventh in 6.59. Burton, who won the 400 in the Group III state meet, finished 11th in 50.90. He finished 0.21 from an 8th-place medal. 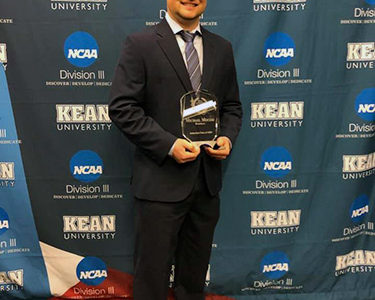 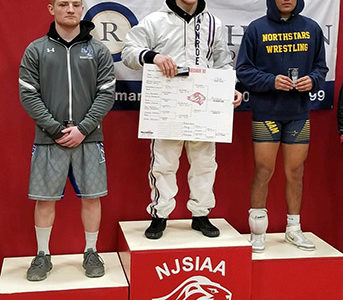