By Rich Fisher
Fish4scores.com
Oct. 28: If the seeds hold up in the approaching NJSIAA Central Jersey Group III soccer tournaments, it could be a fun two weeks for local soccer fans.

The first-round game with the biggest local interest is that time-tested rivalry of Hamilton at Steinert. The two face off Monday at 2:00 p.m.

The Spartans took a 2-0 win at Veterans Park on Oct. 6, as Justin Brunow and Max DiPierro scored second-half goals. Four of the Spartans five losses are by one goal (the other was 2-0), and they are coming off a 1-0 win over Hopewell that gave Steinert the Colonial Valley Conference Valley Division title.

“We are playing pretty well at the moment,” said coach Anthony Tessein, whose side has won four of its last five. “All season we’ve been finding ways to win with a really balanced attack but we fell short against Pennington (in a 2-1 Mercer County Tournament loss).

“I think the Pennington game exposed a couple of weaknesses that we’ve gotten away with all season and we’ve been focusing on correcting those the last few days of practice. That game is a reminder to my team that we are far from perfect, but we aren’t that far from competing with teams like Pennington.” 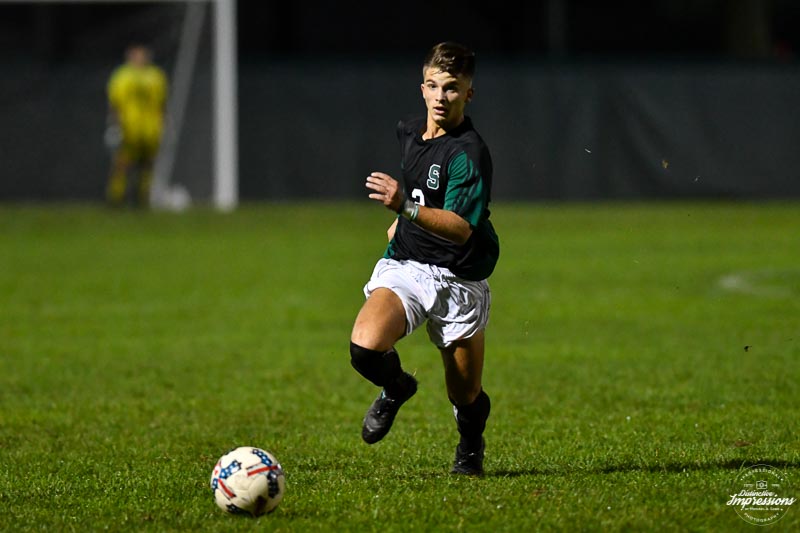 Steinert leading scorer, forward Justin Bruno takes off from the pack against Nottingham in Hamilton’s Patriot Games series. Photo by Michael A. Sabo

Brunow leads Steinert in scoring with 7 goals and 4 assists, while DiPierro has 4 and 4 and Dante Falvo also has 4. Aidan Klein has 3 goals and 4 assists. Goalie Trevor Giordano is coming off one of his best games of the year against Pennington and a nine-save shutout against the Bulldogs.

The Hornets enter the game on a bit of a slide, having gone 0-3-1 in their last four, including a 2-0 loss to Nottingham in their last game on Oct. 22. Roberto Recinos and Silvio Aparacio each have 4 goals, while Gerardo Perez has 3 goals and 4 assists. Recinos and Keith Johnson each have 3 assists. Keeper Giuseppe Sordato has had some big games in goal.

“We’ve been working out some kinks here lately,”  Hornets coach Chris “C-Mo” Morales said. “We’ve had trouble finding the back of the net toward the end of the season and into the county tournament.  Our (MCT) consolation game against Nottingham and a friendly against Allentown was more of the same.  We’ve been trying new things, mixing it up a bit.  We’ve competed strongly in every game this year. There’s not a team we’ve faced that we can’t beat.  Steinert is great but we’re going into it with confidence.

Morales is just hoping his team can play a full 90 minutes this time around.

“Last time we played it was anyone’s game the first half,” he said. “Of course we need to match that intensity off the bat again, but it needs to persist through the entirety of the game.” 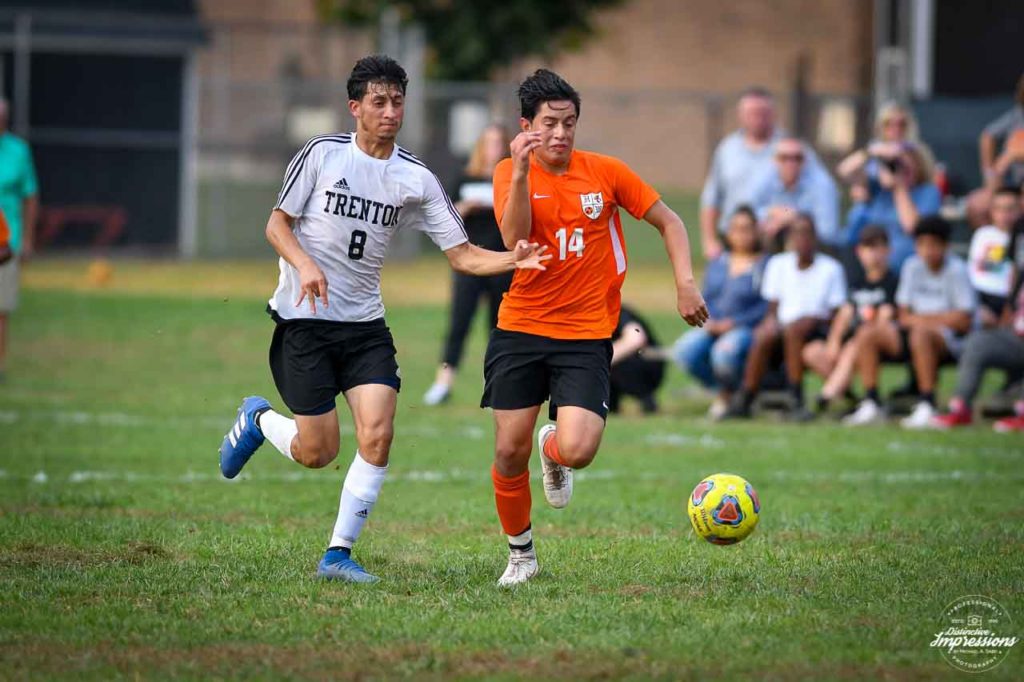 Tessein realizes the records mean little when states roll around.

“Hamilton is a talented team with a nice balance of youth and experience,” he said. “They have played every team close this season and that worries me. It’s also hard to play any team twice in a season, especially a Hamilton West team that knows us as well as they do. We need to stay focused on the task at hand.”

Nottingham’s task will be 2nd-seeded Ocean Township, fresh off upsetting CBA in the Shore Conference Tournament finals.  The Northstars are 4-10-2 but their most recent loss to Robbinsville was a giveaway as Nottingham graciously served as the foil for Raven manager CJ Inverso’s memorable night. Prior to that, the Stars halted a four-game winless streak by beating the Hornets.

“We’ve been playing well, we’ve got to be able to finish some goals off and we’ll have a chance,” coach Mike Braender said. “Especially if you get the first one, that’s a huge momentum swing. It really hasn’t been our goaltending or defense that’s been the problem, we just haven’t been able to put the ball in the goal. Our record is a little deceiving when you look at it. We’ve been in every game. We just have to  be positive going in.”

The Northstars counter with a quality goalie in Pat Luckie, while Fantzly Petit (5 goals) and Larnicho Weh (4), are the leading scorers. If there is a bright spot for Nottingham, it’s that Ocean’s nickname is the Spartans, and the Stars own one win over a team with that moniker this year.

“We’ll just point to our Steinert game the first time around (a 3-1 Stars win); just getting them excited to play wasn’t that difficult,” Braender said. “You gotta take it as if you’re playing them every game. We don’t know much about  Ocean, they don’t know much about us. It’s a clean slate going in, everybody’s 0-0.” 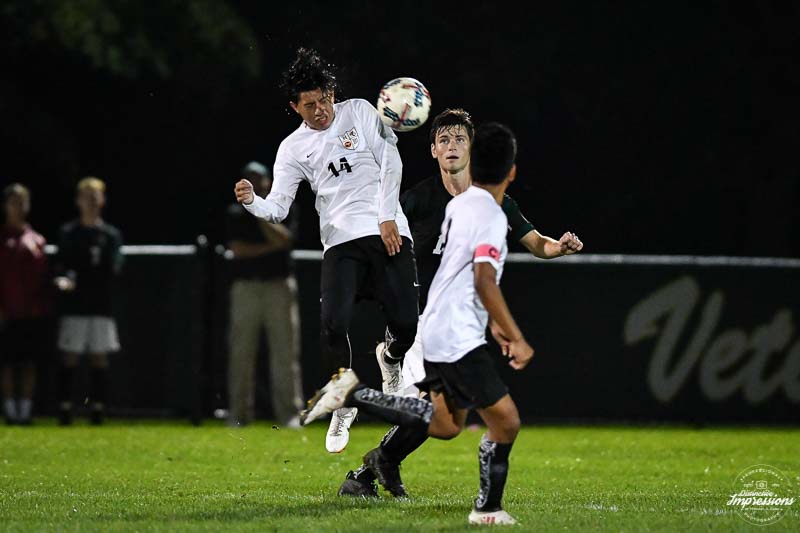 Nottingham’s Pierre Bosquet with a header against Steinert. Photo by Michael A. Sabo

The Spartans are slumping, having lost three straight 1-0 games, while the Scarlet Fliers are on the upswing at 3-1-1 in their last five. Even worse for Steinert is that leading scorer Brielle Flodmand (7 goals, 7 assists) is out with a concussion that she suffered against Cinnaminson two games ago. She is going through the protocol but her return is uncertain.

Amanda Papamanolis is the team’s top goal scorer with 8, while Crysten Wood has 6. Goalie Katherine Calle has allowed just four goals in her last 7-1/2 games, and has yielded as many as two goals just twice this year.

The Fliers are led by Cassandra Ferguson, who has 6 goals and 4 assists, while Maria Seidle has 5 goals and Alena Totten 4. Bryanna Hankins is the facilitator with 8 assists. Goalie Lauren Hagerman has had seven games with double-figure saves, including 16 once and 14 three times. 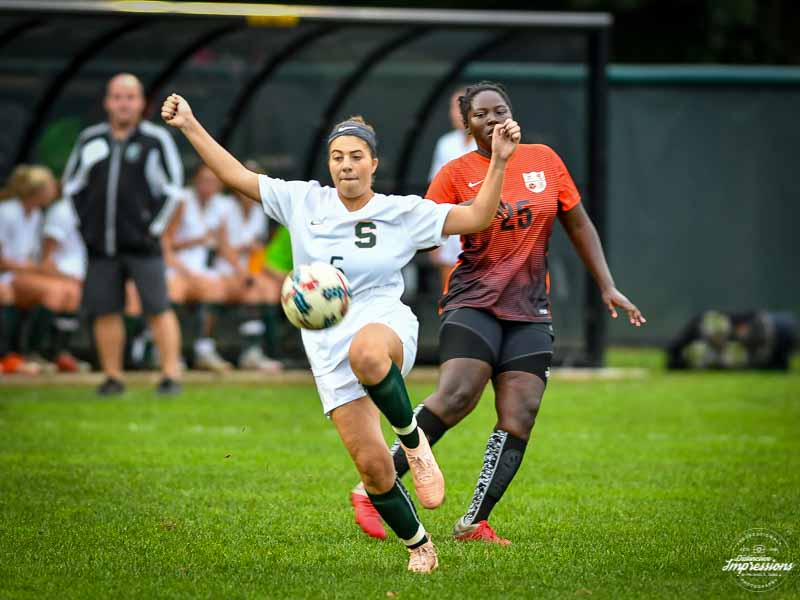 Brianna Papamanolis, pictured and her sister Amanda one of the Spartans leading scorers have helped propel Steinert to an 11 win season. Photo by Michael A. Sabo

“Obviously we are struggling to score goals even though we are dominating at times,” Steinert coach Mike “Stinger” Hastings said. “Someone needs to step up (for Flodmand) and become an offensive threat for us in the tournament.”

“All I know about Neptune is that they play in the Shore Conference so they are going to be better than what their seed is. Throw out the records during the state tournament anyway, everyone gets a clean slate and begins 0-0. My girls work hard and put forth the effort, hopefully we can find the back of the net and make a nice run in the tournament.”

While Steinert has struggled to score, Nottingham can’t stop finding the back of the net. The Northstars have won five of their last six – with the only loss coming in the MCT to champion Pennington – and have scored 21 goals in the five victories. Gia Girman has been the scourge of the CVC this year with 31 goals and seven assists, but teams also have to focus on Emily Midura (9 goals) and Ivonne Vasquez (6 goals, 12 assists). Goalie Sara Haas has 163 saves and nine games with double-figure saves, including 24 against Notre Dame. 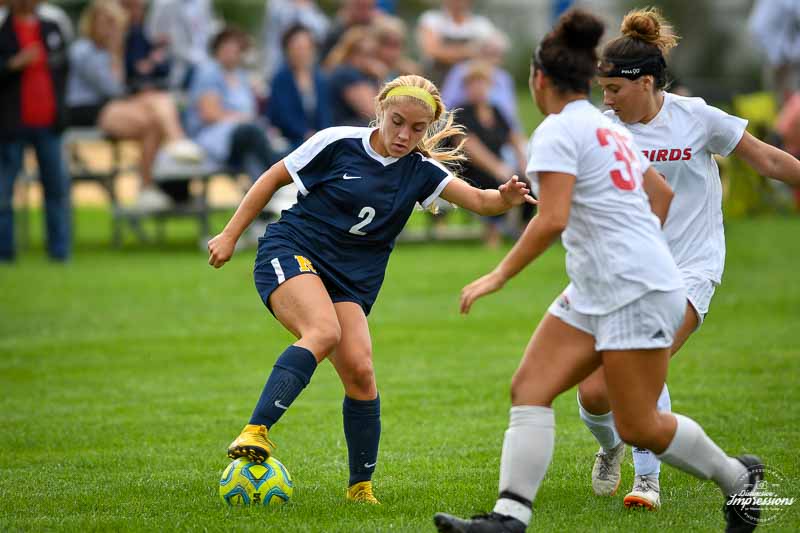 Gia Girman has 31 goals this season and 45 in her career with 2 more years of varsity play to go for Nottingham. Photo by Michael A. Sabo

Haas had 11 saves in the Northstars 2-1 win over WW-P North on Sep. 17, and Girman scored both goals. Sierra Counts had the North goal. Jillian Pelosi is the Northern Knight to watch with 20 goals.

“West Windsor is a very good team and plays with very high intensity,” Nottingham coach Christie “Fish” Fink said. “We need to come out ready to play from the first whistle and put the full 80 minutes together. We have to win every 50-50 ball and transition together as a team.

“I love our team chemistry right now, but we have to show up and be ready to play on Tuesday.”

Fink has done a remarkable job in turning Nottingham around. She took a team that went 2-14-1 and, in her first three years, has guided the Stars to records of 6-13, 9-8 and 12-4. Nottingham will attempt to win a first-round game for the second straight season after defeating Pemberton, 1-0, in last year’s first round.

If the Stars can beat WWPN, it would get a second home game after not having any for several years.

“It would mean so much to the program and to the girls to get a win on Tuesday,” Fink said. “They are so excited to have a home state game and they are looking forward to enjoying the moment.” 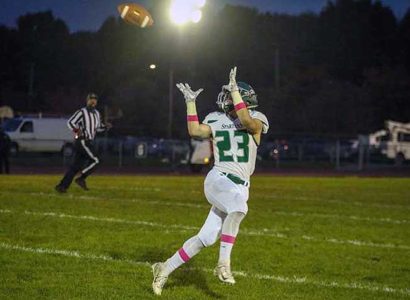 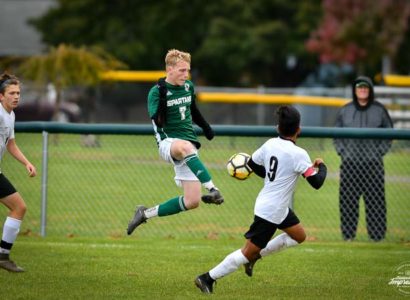