Despite battling health issues during the season, Torres won the CVC Valley Division title on Oct. 19 by running a 15:52, which is a school record on West Windsor-Plainsboro North’s course. It capped an outstanding regular season in which he won every dual meet race except against Princeton’s Alex Roth, who was one of the state’s top runners.

On Oct. 28, Torres followed with a fifth-place finish in the Mercer County Meet at Jamesburg’s Thompson Park with a time of 16:28. Considering he was running with a stress fracture that kept

Torres out of the state sectional meet, it was a courageous effort.

And all of this came in his first year of running cross country, as Torres was recruited off of the soccer team by teammate Jose Colon. 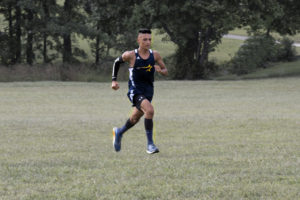 Jonathan Torres in stride at a cross country event. Photo by Jairo Torres.

And although we’re a little late with this, it was enough to make him the Fish4scores/Rossi’s Athlete of the Week for the week of Oct. 28-Nov. 4.

“His fifth-place was the result of an all-heart effort,” Nottingham coach Dave Tees said. “He wasn’t happy with it because he is such a competitor. Realistically though, he did very well considering the training that he missed the last two weeks.

“You could see in his face where he wanted to be. His legs just couldn’t get him there. It was frustrating for him, but he fought for it.”

Also during the course of the season, Torres set the Nottingham record at Mercer County Park (15:59), breaking James Cole’s mark of 16:08.

“My season as whole was a pretty successful season,” Torres said. “I did not think I would win so many races in cross country. It was a good feeling having those victories.”

The best win, of course, was claiming the Valley Division race, which he originally thought about skipping due to his leg issues.

“In the end I decided to run because I could not disappoint my parents or coaches,” he said. “It was a good race overall and it felt good winning it. It also felt good coming back to school and hearing my teachers and other coaches congratulate me on the victory.”

He had eight days to prepare for the county meet, and worked hard with trainer Sam Quinnette. But he was unable to train as hard as he wanted, which led to a painful race.

“The pain I was feeling was not necessarily the problem with my leg,” Torres said. “The pain was more of the fact that I did not train good the week leading up to MCTs. Due to the injury, I had to cut down my training a lot after the Valley Division race and that affected me a lot during the race.”

“It had to have hurt, badly, but he never gave in to it,” Tees said. “Stride after stride, he gave all he had until he crossed the line. He showed a level of mental toughness that a coach would like to see in every athlete.”

And while he was OK with finishing fifth, Torres would rather have been at full strength to reach his full potential. 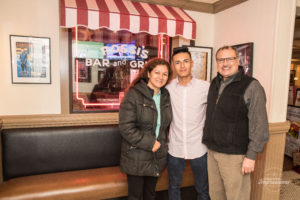 Jonathan Torres with his Mom and Dad at www.rossisbarandgrill.com. Photo by Michael A. Sabo.

“I was not happy with my result because I know I could have been at least top three in MCTs,” he said. “Looking back and thinking about the fact that I was not in good shape and still placing fifth in MCT’s does satisfy me but I’m still pretty upset I could not perform my best when it really mattered.”

On Halloween afternoon, Torres visited an orthopedic surgeon to get results of an MRI. He was advised to either stop right away and let the leg heal, or finish the season with light training. Torres opted to let it heal so he could run winter track.

As for Tees, he can’t wait to see what his runner does next year.

“We run in a very tough league,” the coach said. “That’s why it’s exciting to see Jon do so well, especially when it was only his first season.” 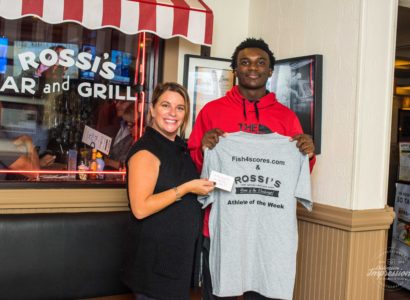 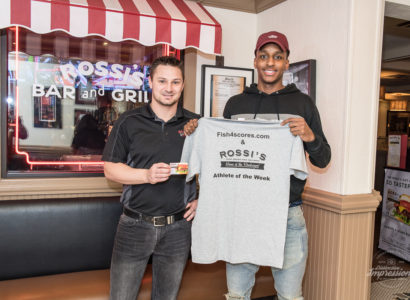