Hamilton’s offense has been clicking on all cylinders lately and a major reasons is the offensive line work of (from left) Zach Medina, Patrick Migliaccio, Ish Gonzalez, Gage Storer and Jacob Darby. Not pictured is key reserve Connor Kasa (Photo by Annamaria DiSpirito).

By Rich Fisher
Fish4scores.com
Oct. 14: Everyone knows that over the years – what the heck, over the decades — Hamilton West football has been predominantly a running team. It’s no different this year, as Kevin “Boz” Boswell is one of Mercer County’s top rushers.

But does the latest effort by quarterback Mike Nielsen and his receivers prove that the Hornets have a dangerous passing game to go along with it?

If it didn’t, teams may get burned again by a Hornets aerial attack that struck for two touchdown passes over 50 yards in a 35-0 win at previously undefeated Hopewell Valley. Nielsen finished the night 4-for-5 for 164 yards, as Hamilton’s running game, which amassed 267 yards, set up opportunities to strike with the pass.

“It’s great,” Nielsen said. “They’ve got the whole defense focusing on (Boswell). Now we’re spreading it out and it’s great. I just have to trust my receivers. I just threw the ball up, they came down with it and ran.”

Nielsen was being somewhat modest. His first TD pass went a long way down the right sideline as he hit Zykeem Williams in perfect stride for a 71-yard strike. He didn’t have to throw the second one as far, as it was a medium pass over the middle to Nate Rodriguez, but it went for 77 yards thanks to a perfect delivery, some smart play by the quarterback and breakaway speed by Rodriguez.

“It was expected (to go for a TD),” Nielsen said. “I saw the safety coming down the opposite side. I looked him off, had a guy wide open and he took it away.”

It is all part of the advancement Nielsen is making under first-year coach Mike Papero and his staff.

“Mike Nielsen is a hard-working, intelligent kid with a great arm and quiet leadership,” Papero said. “He doesn’t have to be a vocal leader right now. He’s another player who just goes to work every day, is super coachable, and we are all seeing the progress every day in practice. He has a 4.5 GPA, and that translates on the field. He completely understands our offense, what we are trying to do, how to read defenses. He just gets it and doesn’t get rattled.”

“Everyone knows that Boswell is a stud,” Papero said. “Being able to throw the ball will open things up for him and other runners. We aren’t going to just hand him the ball 30 times per game. That’s too predictable, plus we don’t want to run a 17-year old running back with a bright future into the ground, we want to keep him fresh, it’s a long season.

“We have other weapons who can run the ball and now people are finding out that we have a few other arrows in our quiver. Being a great football team is about balance, so we need to be able to find success on the ground and through the air. Our offense is evolving and improving. We have a long way to go. We are happy, but not content with our progress. Our fullbacks, Chase Cronce and Tolu Adeaga have been doing a great job and our tight end, Christopher Cronce, has been working his butt off and has become a very good blocker.”

Speaking of blocking, the key to any offense is its line. That was an issue in the preseason as injuries made it difficult to form any kind of cohesiveness. The line was not completely healthy until the season opener against Somerville, which did not go well. Since then, the linemen have gotten comfortable with each other and Hamilton brings a 4-1 record into Saturday’s Backyard Brawl with Nottingham.

“Medina is the leader up front,” Papero said. “Migliaccio has become a mauler, Storer is the quiet one who just goes about his job and is underrated, Ish Gonzalez is a spark plug up there, and Jacob Darby is the vocal guy who is kind of the heart and soul. Then Connor Kasa can play guard or tackle and the kid is always smiling but loves to hit people. Continuity is key for a successful offensive line and the fact that they are all healthy and beating with one heart, it’s no wonder they’re playing so well right now.”

It has been the key to an offense that has averaged 34 points per game during its four-game winning streak. Another key has been Paul Newman, the actor.

“We had a talk about the movie Cool Hand Luke during camp,” Papero said. “I always mention the ‘Cool Hand Luke Mentality.’  That’s what I expect from our players. We talk about keeping our composure when things aren’t going our way, so if we go three and out, or we turn the ball over on the second play of the game like we did against Hopewell, no one is panicking, pointing fingers, putting their palms up. We just get back up and keep going. That’s why our offense is having more and more success as of late. We are building our identity, staying confident and playing it cool.”

And doing more than just running the ball. 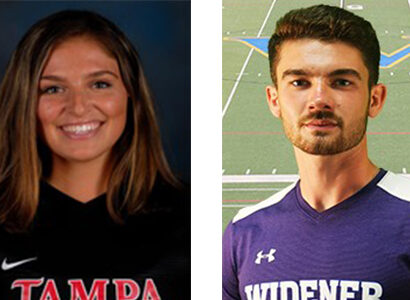 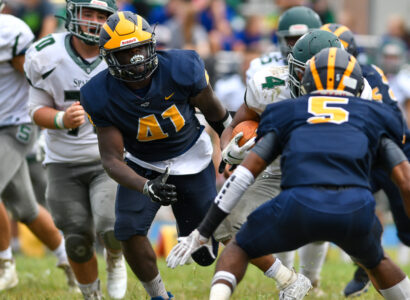