Oct. 4: The biggest problem with little losing streaks, is that they can turn into long losing streaks and pretty much take the heart out of a season.

Many a Nottingham girls’ soccer player has experienced that feeling over the years, and the Stars were teetering on the brink entering today’s home game with West Windsor-Plainsboro South.

A red-hot start was threatening to spiral out of control with a three-game losing streak and losses in five of the last six games. Granted the setbacks were to good teams, but the Northstars needed to stop that trend in a convincing manner or risk a meltdown.

They did what needed to be done, taking a 3-0 victory over a Pirate team that did not look close to being as bad as its 1-9-1 record indicates. With goalie Alyssa Usab playing out of her mind in the first half, WWPS could have in position to steal one and add to Nottingham’s woes.

But there has been a new attitude brought in by second-year coach Christie Fink, and Nottingham (5-5) is at .500 this late in a season for the first time in over 10 years.

It’s the kind of thing that happens when teams learn to bounce back.

“That’s definitely a key that we need to work on,” senior sweeper Madison Diaz said. “In previous years we’ve gotten stuck in slumps where we would lose and keep our heads down for the next game, which we can’t do. This year, having a lot of younger girls, it’s up to us to be able to tell them we have to be able to bounce back and come back from stuff like that. It’s really important.”

“We had a little rough patch but it’s all a learning experience,” said Fink, who bravely toughed it out on the sidelines after using detergent-tainted eyedrops earlier in the day. “We’re trying to rebuild, trying to get where we want to be. We have to realize it’s not going to happen overnight, and we have to make some strides every single game and every single day. We have to enjoy it, take everything into consideration and keep pushing forward.”

Nottingham did just that today, on the scoring strength of two juniors. Giuliana Pocino scored twice and Ivonne Vasquez once to both raise their season total to three. It was just the second win in which freshman standout Gia Girman did not score, and Nottingham was also stunned to learn it will be without senior forward Stephanie Teixeira for the rest of the year. Teixeira, who had three goals, tore her ACL Monday against Notre Dame.

“We were super happy when she came back this year,” Fink said. “She was a huge, and still is a huge asset to our team. She’s still gonna be very involved. It was a heart-breaker for us on every level, but she’ll get surgery and be back with us. Unfortunately, she’s done playing, but we’re still happy to have her in our program.”

Despite Teixeira’s absence, the Stars offense was clicking impressively in the first half, with only Usab preventing them from blowing it open. Vasquez scored from 37 yards out on a high, lofting free kick that may have gotten lost in that brutal 4:30 sun at Nottingham.

Pocino finished the scoring by drilling a shot through a forest of bodies from the top of the box, and then scoring on a short corner kick that she took off a feed from Girman on a corner.

West Windsor also had some chances, but Sara Haas was equal to the test. Haas had five saves and Madison Colabella four in the second half.

“Maddie and Sara have both been playing very well,” Fink said. “They both deserved a chance to play the game.”

The victory puts Nottingham within one win of equaling last year’s total, as the program continues to make strides under its second-year coach.

“Our chemistry has changed a lot,” Pocino said. “The momentum she brought to the program and how much she believes in us has really helped.”

Another thing that has helped has been the addition of the Girman freshmen. Gia leads the Stars in scoring with eight goals, while twin sister Gabi has been starting in the back.

“The Girmans have been a very nice addition to our program on all levels,” Fink said. “The girls absolutely love them, they fit right in. They’re like two peas in a pod with the girls. They’ve both stepped in, are playing a lot and helping out the team. They’re raising the level and raising the bar. They came into preseason ready to go and have been ever since. We’re very lucky to have them and excited to have them for a few more years.”

Michaela Miranda and Giana Pittaro scored second-half goals off assists from Maddie Klein and Lynzie Morgan as the Steinert girls took a 2-0 win over visiting Lawrence. The score was kept down thanks to Sara Hatfield’s standout effort in goal, as the Cards senior goalie made 18 saves.

The victory pushed the Spartans unbeaten streak to eight (7-0-1) and put their overall record at 9-1-1. Even more impressive is the scoreless streak the Spartans have put together. Erika Golik made six saves to record Steinert’s seventh straight shutout and eighth overall.

The Spartans have allowed just four goals this season, and haven’t yielded a day time goal since its loss at Allentown Sep. 13. The last goal Steinert gave up was to Nottingham’s Ivonne Vasquez during the Sep. 15 night game at Veterans Park.

Leanna Gioscio and Lauren Korpics each scored goals but it wasn’t enough as the Hamilton West girls fell to Hopewell Valley, 6-2. Jenna Slack and Arianna Venceller had assists.

The Hornet boys fell to Hopewell Valley, 2-0, as Giuseppe Sordato made 10 saves in goal for Hamilton. Steinert’s offensive woes continued in a 1-0 loss to Lawrence. Tom Kozemchak had seven saves for the Spartans.

Nottingham boys had a late-night game on the West Coast. Well, actually at West Windsor South. 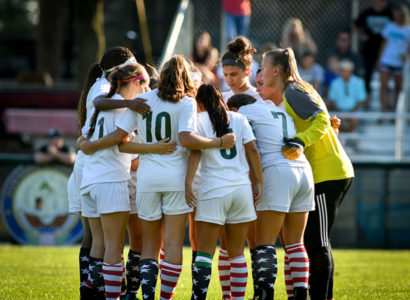 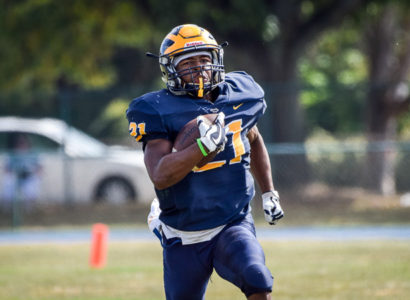