Steinert Running Back Will Laster and Hamilton West Running Back Kevin Boswell look to put on a show for this year’s Spartan West Thanksgiving Day Classic. Graphic and Photos by Michael A. Sabo.

Until it comes to describing his feelings on Thanksgiving morning the past few years.

“It’s just unexplainable,” Hamilton West’s junior fullback/linebacker said. “It’s not just certain people on this team who want this win, we all want this game.”

It’s easy to see why. The Hornets have lost four in a row to Steinert on Turkey Day. That has only happened one other time in the history of the series, and the Spartans have never won five in a row.

And while this is your classic throw-the-records-out-the-window rivalry, it’s hard to ignore how good Hamilton has been this year and how much Steinert has struggled. For the Spartans to get that history-making fifth straight, they will have to spring a pretty big upset.

Steinert is 2-8 and has lost two straight. Hamilton is 7-2 and had a seven-game winning streak snapped by Middletown South in a 24-7 Central Jersey Group III playoff loss. It’s often said winning this game makes either team’s season, and that would be especially true for the Spartans this year.

“It would mean a lot to me and the rest of the team if we won,” Steinert two-way lineman Savion Cooper said. “I think no matter how rough the season was, ending off on a high note would be great.”

Not to mention, it would give Steinert its longest Thanksgiving win streak ever (Hamilton won seven straight in the 2000s) and divide the Joe Logue Trophy into a shared prize between all three township teams.

“As a team we haven’t talked about winning five straight, but I talk about it all the time with my buddies and it would be a great feeling having to not lose to West all four years and to just get a win my last game of football in high school,” Laster said. “I try not to think about the Five-pete. I don’t want to go in thinking about keeping the streak alive. I just want to think of it as a regular game even though it’s basically our championship game.”

It’s an actual championship game for Hamilton, as a victory gives it the outright Logue Trophy for the first time since 2007.

“The Joe Logue trophy would mean everything to us,” defensive lineman Joe Muni said. “It will show that we’re the most dominant team in Hamilton. Also it shows how hard we worked from last season.”

Not to mention, the Hornets are tired of tasting turkey tinged by defeat (say that three times fast). After losing three straight by a total of four points, they were shut out for the first time since 1992 last year in a 26-0 loss. And, of course, it would be absolutely brutal for West to end what has been a stellar season with two straight losses, including one to its arch-rival.

“I’m going to go out there with everything and more to get this win; not for myself but for coach (Mike “The Meatball Master”) Papero and everyone else on the team,” Cronce said. “I will be the last to celebrate. I will do anything for the group of guys I play with on that field. They are everything to me. Knowing that I did something that made my team happy is a win to me. Seeing them smile is a win to me.”

Cronce and Muni are part of a defense that can do a lot of different things. It has speed and strength, it plays aggressive and it sets a tone.

Offensively, Kevin “The Boz” Boswell has been the show. The junior has been named the 12th Man TD Club’s Frank “Mammy” Piscopo Memorial Award winner as Mercer County’s Non-Prep Player of the Year. Boswell has run for over 1,000 yards two straight seasons and this year has rushed for 1,387 yards and 18 touchdowns in just eight games. He needs 53 yards to break Shelton Snead’s 1999 single-season school record, and needs four rushing TDs to break Snead’s school record in that category and tie the mark for most TDs in a season.

For Cronce and the Hornets offensive line, The Boz has been a joy to block for.

“Knowing I’m Kevin’s lead blocker is just amazing,” Cronce said. “If I throw a good block out there I know he’ll break one free and if I miss a block, he’s still going to adjust from it and get a big gain. Kevin and I go back to the Pop Warner days playing with each other so knowing that I still have Kevin is just everything to me. He’s one of one and I wouldn’t want to block for anyone other than him.”

Steinert counters with a good back of its own in Laster. While Boswell is still pursuing some school records, Laster already owns one as he has rushed for a school-record 1,306 yards and 12 touchdowns, while catching 25 passes for 260 yards. Granted, his numbers are in two more games than Boswell; but the Hornet has had a much more experienced line to run behind and Laster has done a lot of work on his own.

The bottom line is, they’re both good. And the players feel, as usual, the game comes down to who makes the least mistakes.

“The keys to winning this game are to play smart and not turn the ball over,” Muni said. “Also, everyone has to do their job.”

Cronce added that “The key to beating Steinert is to keep playing our game, keep playing the defense we have been playing all year and then let our offense get into the end zone. We just have to keep playing our smack mouth football; meaning when we are on the field, no matter what side of the ball, you’re going to get smacked in the mouth no matter, win or lose.”

Although he’s known for his offense, Laster feels Dan Caruso’s team will have to win it on the other side of the ball. “The key for us is probably our defense because West has a high-scoring offense and we’ve just got to do our jobs on defense and call out their plays,” Laster said. “Most of the time we’ve just gotta focus on number four (Boswell) because he’s a playmaker and can score from anywhere on the field. If we stop him, we can win.” 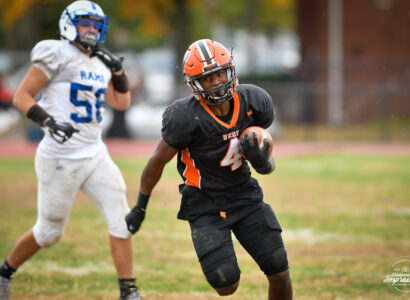 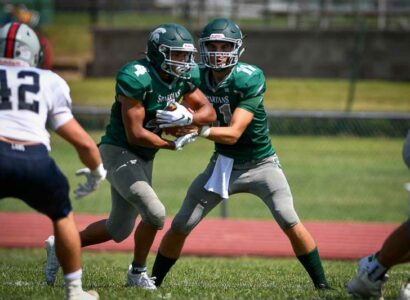