Steinert’s C.J. Pittaro was named to the first team of this year’s Rawlings-Perfect Game All American Northeast Region team. Photo by Michael A. Sabo.

Pittaro, who is headed for Vanderbilt next year after giving a verbal commitment as a freshman, burst on to the Colonial Valley Conference scene by hitting .388 with 27 RBI, 18 runs scored, 4 doubles and 2 homers as a freshman. Despite battling nagging injuries the following two years, the shortstop has a career average of .326 with 47 RBI, 45 runs scored, 14 doubles, 2 triples and 2 homers.

On perfectgame.org’s latest showcase report, based on the 2019 National Showcase, it is said of Pittaro, “Big and strong athletic build. 6.92 runner, has smooth and balanced actions on defense, polished footwork, good hands and gets rid of the ball quickly, has middle infield athleticism now but size might eventually move him to third base. Left handed hitter, hits from a balanced crouched stance, gets good drive off his back leg but lower half tends to lock up, has very fast and strong hands, handles the barrel well with mid field to pull sideline drive contact, high average contact with real bat speed. Outstanding student.”

Although Conover pitched just 2 innings for Notre Dame as a junior, the Mercer County Community College-bound hurler had an outstanding summer in American Legion with Hamilton Post 31 and performed well at the Perfect Game–Rawlings Showcase in January.

Pregame.org’s showcase report on Conover states that he is, “Lean, athletic frame with a high waist and lots of physical projection remaining. Primary righthanded pitcher with fluidity to his delivery. Changes arm slot intentionally between a high three-quarters and side arm. Fastball topped at 79 mph and gets very good arm side running action on the pitch. Better strikes and movement from the lower arm slot. Curveball from a higher slot with 11/5 break and good spin. Sweeping slider from a lower slot and kept similar velocity. Arm strength played well from secondary position of the infield. Lefthanded hitter with a slightly open stance. Looks to get extended and has a bat wag into the load. Maintains balance well with a hanging stride up through foot strike. Some barrel skills and met the ball nicely. Good student.”

Like Conover, Sloss has not put up big numbers during high school, as he has hit just .232 in two full seasons at Hun. But he has excelled with the New Jersey Niners travel program and is  ticketed for the University of Massachusetts next fall. Sloss and Pittaro were teammates on Nottingham Little League’s 2014 District 12 championship team. 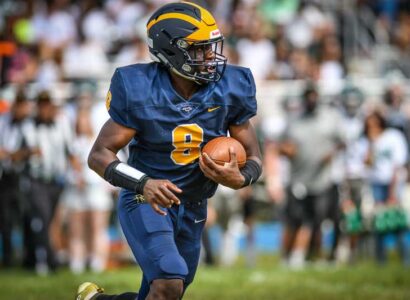 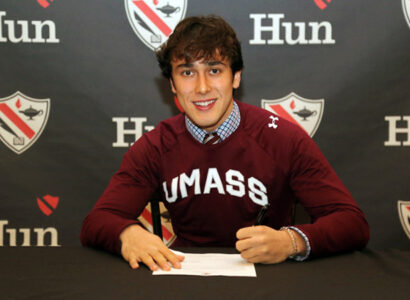