It’s very interesting to note, that for a man who works in the world of banking and finance, you often can’t put a dollar figure on what his services mean to the countless recipients of his efforts.

Terry McCarty’s value to the community, and in particular to Steinert High School, is indeed invaluable and incalculable.

“When I think of Terry McCarty I think of the saying, ‘Do not forget where you come from,’ said Steinert teacher and coach Bill James. “To me, Terry epitomizes that saying. He has deep roots in both Hamilton Township and Steinert High School. Over the last twenty years that I have had the pleasure of knowing Terry, I see a man who firmly believes in giving back. He is one of, if not the most, generous people I know. He truly believes in Steinert High School and is willing to give back in any way possible.”

For his many, many contributions to the Green & White, McCarty will be inducted into the Steinert High School Athletic Hall of Fame during ceremonies tomorrow at The Stone Terrace By John Henry’s. All of the categories in Steinert’s Hall of Fame include a veritable who’s who of people connected to athletics. The “Special Contributor” honor features all-time Hamilton Township names including Joe Logue, Harley Gaskill, Fred Stives, Jack Blair Sr., George O’Gorman, Patrick Hastings, Matt and Maureen Wolski, Joe Bocchini, Tom Buzinski, Chub Manto and others who have left an indelible mark on sports at SHS. Terry McCarty fits right into this esteemed group.

“Terry McCarty is the most generous person I have ever known,” Caruso said. “… The man bleeds Steinert green. He has been a mentor to me since I took the reins of Steinert football as a 27-year-old kid.

“He has shown me what community and selflessness is truly all about. He has helped teach me that wins and losses happen and X’s and O’s aren’t as important as the relationships you build with your players and community.

“Quick story, I had a policy of making the players dress in formal clothes the Friday before every game in school. It was a fun tradition and the kids liked it, but one year we had a young man transfer into school that didn’t have these type of clothes and did not have the means to get them. Terry made sure that young man never had to miss out. I don’t know if the clothes came from Terry’s own closet or a store but I will never forget that young man’s smile as he came into school the next day. He felt like he belonged. He felt a part of something and was proud. That, in my mind, is Terry’s legacy.

“He instills a sense of pride in our players and makes them realize that they are a part of something greater than any one individual. Terry shows them and me every day how to lead by example and how at the same time be a true team player. Terry doesn’t want recognition. He never has. He usually does things under the radar. Whether it is donating money to various programs throughout the school, donating time and money for many charitable events, coming in to speak with business classes at Steinert, funding scholarships for players, or his involvement with the Boy Scouts of America: Terry doesn’t want credit for doing all this, but I cannot express how truly glad I am that he is getting that credit and being honored by the Steinert Athletic Hall of Fame.”

McCarty has been a volunteer coach with Steinert Fooball since 2008. His current assignment is varsity quarterbacks coach and running backs coach and JV Offensive Coordinator. He has also been heavily involved with youth sports at the Hamilton YMCA.

Among other activities, Terry was a student-athlete at Steinert from 1976-79. He earned two letters in football and three in swimming and he received all-county recognition in both sports.

He continued his education at The College of New Jersey (bachelor’s degree in accounting) and then went to Rider University (master’s degree in business administration).

A father of two (daughter Lindsay and son Daniel), McCarty has three granddaughters. He is the Senior Vice President/Director of Credit Management for Institutional Healthcare and Higher Education – USA for TD Bank.

He indicates that he knew early on that it was a sure thing that he would give back to his community.

“I was always inspired for community service,” McCarty said. “My family was heavily involved in it, especially my parents. And my coaches, they always taught me the importance of giving back. It was just ingrained in me.”

It was a lesson taken to heart by McCarty. And it is recognized and appreciated in his community.

“I was able to coach his son in football and get to know Terry,” James said. “That relationship has only grown now that we coach together. Terry is the type of person that will always ask, ‘What do you need me to help with?’, but he never wants anything in return. He has contributed in ways that I believe cannot be truly measured, but they are priceless to those people he helps.

“I am proud to say that I know Terry, proud of what he has done for Steinert and all the programs, particularly football, but most importantly I am proud to call Terry my friend.”

Visit the Hall of Fame’s website (steinertathletichof.com) and Facebook page for information, including how to attend the April 13 dinner. 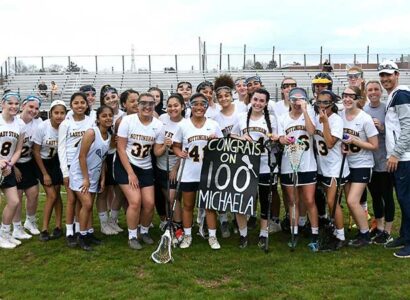 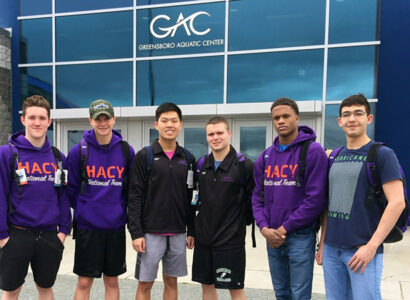